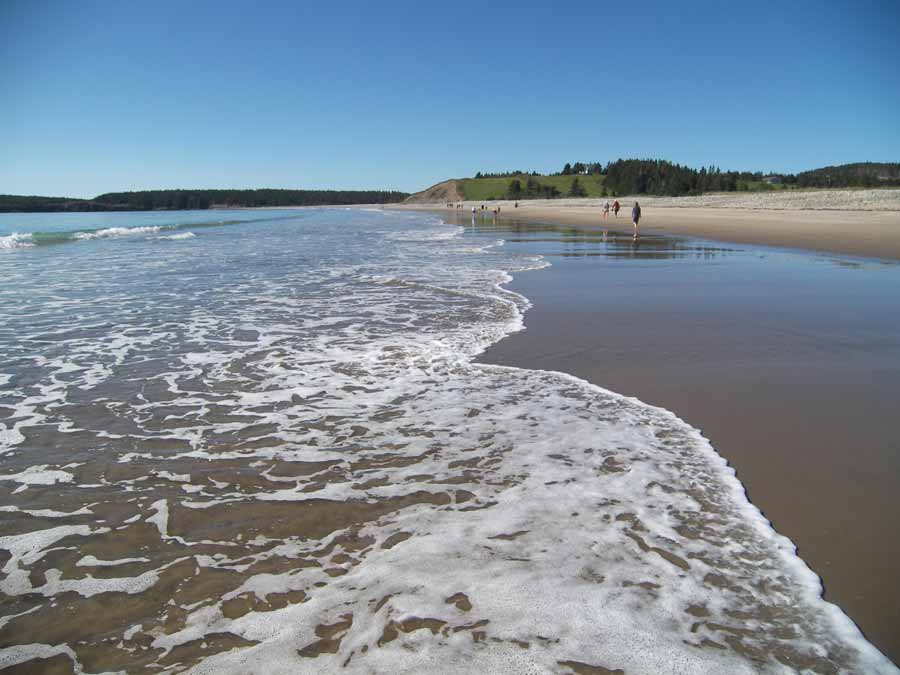 Hirtle’s Beach, south of Lunenburg, is a popular destination year round for local residents, though it is less known to tourists than Rissers Beach or Crescent Beach.

It’s one of those beaches where the sand gets washed away for the winter and returns for the summer – soft beige sand deep enough to bury your brother in. The waves can be big enough for fun body surfing. This is the North Atlantic and the water tends to be cold, but once in a while, warmer ocean currents will come by and surprise you. Not that these teenagers care that much. At the far end of Hirtle’s Beach is a wonderful hiking trail around Gaff Point.

Here’s some more scenery of Hirtle’s Beach featuring my brother and his dogs, Nixxy and Jake. These are Nova Scotia Duck Tolling Retrievers – yes, it’s an official breed. They are smart and fast, great agility dogs – these dogs have lots of ribbons at home.

One of Nova Scotia’s best kept secrets is the “Noel Shore” along the Minas Basin between the Avon River at Windsor and the mouth of the Shubenacadie near Truro. The deep clay soil supports large, lush trees, and the rolling scenery is only surpassed by stunning views of the Basin.

Recently, we were lucky to stay a week with friends at Tenecape near Burntcoat Head. The beach is grand to explore at low tide. Such a contrast with the water lapping at the cliffs at high tide.

If high tide occurs toward the end of a sunny day, the water can actually be quite swimmable, as it gets warmed by the sand as it comes in.

Enjoy the video above.

Talking to people who are drawn to live on the South Shore of Nova Scotia, I find it interesting to learn about what attracts them here.

Living in Nova Scotia is a choice, whether you come from “away” or  have your roots in the province.

I often buy meat from Kevin Veinot at local farmers’ markets. His farm has been in his family for seven generations. Yet he too has made a conscious choice to live here, and to farm sustainably.

As he says in this video, “There’s lots of room here to be different.”

This stunning video by Nova Scotia’s tourism folks features flyovers of the Bay of Fundy coastline, especially dramatic Cape Split. The Bay of Fundy, including its inner Minas Basin is a fascinating place to spend time watching the world’s highest tides. The video gives you the high speed flyover, but if you can spend a few days along this coast, taking in the changing landscape at a slower pace, you won’t regret it.

The 12th annual Sand Castle Competition was held on a perfect sunny day, July 14, 2012.  Here are photos of some of the entries. The winners were the giant lobster and the pyramids.

Tide was 2.2m (7.2 ft) late this morning (see this link for tide chart), and near the causeway to Oak Island the road was covered with several inches of water. In 8 years of watching storms here, this was the highest storm surge we’ve seen, with water flowing completely over the road.